Excerpts from Franca Mancinelli‘s « Croatian Notebook, » in John Taylor’s translation, have appeared in The Fortnightly Review. Here is an excerpt from the excerpts:

I DON’T KNOW why I’m here. Perhaps I have obeyed the sound of broken branches, which reaches me from this unknown language, like walking in a dense forest. There is something immediately familiar in these bits of bark that preserve meanings. It suffices to repeat the name of a place like Zagreb or Kraj Donji to make something mysterious move, like sunrays penetrating entwined branches, or the trail of an animal through a thicket. It is the enchantment of a preverbal world, of good and evil spirits, which immediately envelops me and swallows me back into it, beyond the threshold where a decision can be made, a choice formulated.

For me, this land is the other seashore. On some clearer mornings, from the first foothills of the Apennines or from one of the high slopes on the Marche coast, you can see it emerge like a cloud on the horizon. And nonetheless, it is a land that starts again, after the first nautical miles and the signs of the fish pots, beyond the suspended oil platforms, and the water that becomes deeper and blue, plummeting towards a beauty multiplied by small islands. If you leave on a sailboat at night from the port of Pesaro, at dawn you are greeted by the lighthouse of Susak. It suffices to say its name, recognize it on the map, to definitely feel the beginning of another world. Or drive on the panoramic road of Monte San Bartolo: between one curve and another, at times this fragmented and obscure language emerges from the radio like something coming from the other side of a mirror.

But coming to meet you, this time, is a land frozen with sharp boundaries and small houses shut up into themselves. As if the lens of winter had returned the clear-cut image, reunited with its essence. This is what I always seek: beyond the bud and the foliage, the nude drawing; branches woven together like nerves of life. Only then do the dark shapes of abandoned nests and the spheres of mistletoe appear between the forks of trees. Sometimes crows or large black ravens make a halt, in flocks that fill the branches like fruit. An invisible signal suffices, something goes by in the air, so that the tree is handed back to itself. This is the most important thing that happened during the trip through snow-covered Slavonia, in the silence interrupted by the barely audible clicks of lenses that open and close. They are the eyelids of my companions who are trying to capture reality. While I watch and, in my notebook, mark something that looks like bird tracks on the snow. I will not be able to read them, but I leave them anyway, trusting someone who is in transit inside me, a hunter walking on this trail. When I am far away and he is here, the form of what is happening will be fulfilled in these words.

The ravens have come to leave you with a lesson. The most difficult one. Those black fruits on the branches, that unexpected presence. And suddenly the detachment, the emptiness that comes back clearly. You call it abandonment, try to recognize it as a restitution.

—translated from the Italian by John Taylor 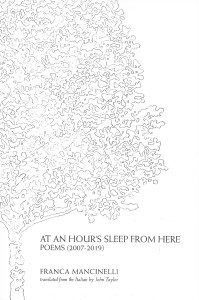