A selection of « five apperceptions » from John Taylor’s book The Presence of Things Past have appeared, in Marco Morello’s Italian translation, on the website L’ombre della parole. Here is the original English version of John Taylor’s introduction to these five texts:

In the early 1980s, after the death of my mother (in October 1981), I set aside verse poetry and started writing the prose texts that would fill out my first book, The Presence of Things Past. Looking back on that “turn,” I can perceive some of the literary motivations that guided me. I had been working under the influence of C. P. Cavafy’s historical poems and attempting to evoke the lives of my Puritan ancestors, all the while seeking a concise, melodious free verse in which I could express my “petite musique” (as one says in French). I should add that by October 1981 I had lived in Europe since 1975, first as a student in Hamburg, then on the island of Samos, and finally in Paris.

But with my mother’s death, the task of finding a poetic language engaged me much less than the deep inner necessity of evoking that event as well as other events or people going back to my childhood in Des Moines, a middle-sized town in the American Middle West. Indeed, the very notion of “poetic beauty” became suspicious to me. Moreover, as I was jotting down the first drafts of those childhood memories, trying to be as faithful as possible to what I was actually remembering and rejecting whatever my mind seemed to be adding or modifying for literary reasons, all that I ended up with in my notebooks were fragments: no detailed, well-developed narratives with rounded-out characters and clear chronologies. Substantial parts of my memories seemed unfinished, incomplete, lacunary—and authentically so in that this is how I was recalling such and such an event, or such an such a person. My first prose texts therefore sometimes had no genuine beginnings or, even more often, no definite endings; and I evoked, not described, my characters with the relatively few details at my disposal. I did not want to invent, to add any fictional “mortar” to transform my fragmentary texts into classical Anglo-American short stories. If I were to invent details, wouldn’t I be straying from the already elusive “truth” of a recollection? By which I mean a recollection that would not necessarily be rigorously “true to life,” that is, “true” to what actually happened in the past (for no mind, photo, film, tape recorder, or lie detector can recover the past in its exactitude), but rather a memory to which I would not consciously add anything to improve its literary qualities. There was no question of concocting an ending for a story: so much that had happened in my life seemed to have no ending; feelings were not conclusive, nor concluded. The past (and the future) were as present to my mind as the present.

Of course, what I have sketched out here about my methodology must be qualified. While revising my first drafts, I would necessarily strike out a needless word or seek a synonym that would more precisely pinpoint an image. I would correct a syntactic ambiguity. But my general rule remained constant: no invention, or at least as little as possible. It was only at the last minute, before the stories were published, that I changed the real names into fictive ones, creating new names by means of phonetic permutations.

At the time I was translating the short stories of Elias Papadimitrakopoulos, a Greek writer who evokes his own childhood in the 1930s in Pyrgos, a town in the Peloponnese. His own short-prose style, as displayed in his first two books, Toothpaste with Chlorophyll and Maritime Hot Baths, liberated me from the classical Anglo-American short story. Papadimitrakopoulos also focuses on a few telltale details and leaves much to the reader’s imagination, not however out of any literary strategy, but because he too does not necessarily know or remember what actually happened before or after the key event, or because he is unaware of some of the elements constituting it. Like mine, his childhood, as it comes forth in his prose, is full of fragments and gaps, along with a major tragedy: the early death of his father.

As I was working on my translations of Papadimitrakopoulos’s stories and writing my own prose texts, another issue emerged. Perhaps because several of my texts dealt with death, that of my mother and of a few neighbors and one unforgettable schoolmate, I started examining how I, as a first-person narrator, was spontaneously noting down the perceptions, thoughts, and feelings associated with my memories of those people when they were alive and of myself when I was in their midst, observing them. Without initially thinking about stylistic concerns, I was often employing in my first drafts a kind of formula: I feel myself feeling, I sense myself thinking, I am aware that I am seeing, smelling, touching, and so on. I was drawn, as an autobiographical writer, not always to perceptions in themselves but often to “apperceptions,” those states of heightened awareness during which one senses that one is in the process of having a sense impression, of experiencing an emotion, or of harboring a thought. These are privileged moments during which one senses that one is alive; they enable us to feel what it means to be alive: not just a series of sensations, even of strong sensations, but rather sensations that are accompanied by the subject’s awareness that he is experiencing the sensations: the consciousness of one’s self as the subject receiving the sensations. It was not long before I was turning to Leibniz, Kant, and especially Maine de Biran.

Leibniz defines “apperception” as the perception of an object as a “not-self” and yet as being in relation to the self. Kant sees “transcendental apperception” as the perception (of an object) which involves the consciousness of the pure self as the subject— »the pure, original, unchangeable consciousness that is the necessary condition of experience and the ultimate foundation of the unity of experience.” He defines a second kind of apperception, “empirical apperception,” as the subject’s awareness of the changing states of his self; this is the subject’s “inner sense.” In his book De l’aperception immédiate (1807), the French philosopher Maine de Biran analyzes these cognitive phenomena in subtle detail. His approach helped me to understand how I was groping for passages between the outer world and my inner world, between another person and myself, between my mind and my body. In childhood I had seen, indeed experienced “separations” on numerous levels of human experience, including the most private, the most intimate ones. The notion of an “apperception” enabled me to grasp how I was trying to bridge some of those gaps.

I ended up thinking of my shortest prose texts as “apperceptions.” The texts are not prose poems; nor are they stories. They attempt to capture a moment of remembering in which I am aware that I am remembering. In any event, the term “apperceptions” emphasizes the pursuit of the crucial question: what does aliveness signify, imply, in an existence encircled by nothingness and death?

When the time came to put together my first book, I decided not to set off in any categorial way these short texts from the somewhat longer texts that I had also written; they also employed apperceptions as an integral element of their narrative approach. I eventually found an order for all the texts, long or short, basing my choices on criteria other than length: usually an emotion that would yield to a second, somewhat different, emotion in the following story. I ended up grouping all these prose texts under a title that refers to one of Saint Augustine’s concepts: The Presence of Things Past. 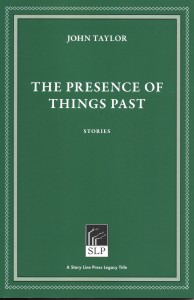