John Taylor’s book Harsh out of Tenderness: The Greek Poet and Urban Folklorist Elias Petropoulos has just appeared at the Cycladic Press.

« It was a Saturday afternoon in May, 1979. Elias Petropoulos had started laying a stone walkway behind his and Mary Koukoules’s country home in Coye-la-Forêt, a village located north of Paris. It was my first visit to him there. I helped him to continue the path. The heavy flat stones were piled at the back of the yard. We carried them one by one toward the house. Petropoulos was fifty-one years old. I was twenty-seven. I kept insisting—to no avail—that I alone do the carrying. Taking turns with the shovel, we knifed through the grass into the hard ground, slipped the shovel blade just below the roots, removed large flat pieces of sod, then shoveled out a little more dirt so that the stones could be placed firmly in the ground. Using a watering can, Petropoulos poured a little water onto the shoveled space. I would place the stone there in the exact position that Petropoulos had determined— a maniac in this respect as in so many others. Then he would stand on the stone, wiggling slightly, using his weight to fix the stone permanently. The labor in the hot sunshine made us grimy and sweaty. When we finished, Mary served glasses of cold lemonade. . . » 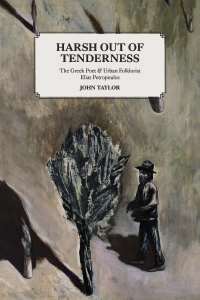