John Taylor and Pierre Chappuis have been interviewed by Laura Marris on the website Reading in Translation about their « double book » A Notebook of Clouds & A Notebook of Ridges (Fortnightly Review). Laura Marris writes in her introduction to the interview:

« Some of us, if we are lucky enough, have witnessed it—the moment when a passing line of clouds tangles with the trees of a ridge, blurring the distinctions between branches and vapor, between landscape and sky. This thoughtful, sensitive volume offers the poetic equivalent of that process, a brush between two imaginative intentions. While John Taylor was translating Pierre Chappuis’ Notebook of Clouds, he also found himself jotting notes about ridges, responding to Chappuis’ work with fragments that would become a project of his own. The two poets ultimately decided to publish both notebooks as a collaborative volume.

Though this book presents the work of two writers, the relationship between these notebooks is not a simple parallel. By translating Chappuis’ Notebook of Clouds (originally published in French in 1988) and then creating his own Notebook of Ridges, Taylor also documents the imaginative relationship between translator and author when both are poets. Like the practices of translation and writing, these pieces are “akin” to each other, sharing a resemblance that is both formal and figurative. Placing Taylor’s notebook next to his excellent translation of Chappuis allows his translator’s practice to come full circle, to substantiate the ways that translation has sensitized him to aspects of his own creative intelligence.

Both notebooks are testaments to the imaginative power of out-on-a-limb-ness, of the tendril, the balancing act. Chappuis writes, about cloud-shapes: “Dunes as well, remote announcement of worlds in gestation// wealthy with so many kinds of absence, where are we?” This richly open-ended question has a rather cosmic scale, as things tend to do in the sky. On earth, however, there is more vertigo. Taylor writes “A single trail along the ridge. Rarely an alternative once you are running the risk.// At best, a temporary sidestep because of a stone, a mound of dirt, a clump of grass.// Insignificant veerings.” Both feelings—suspension, vertigo—reach towards one another through the images they employ. For example, we have cloud “dunes” and a ridge “trail,” a satisfying remix of what evokes earth and what evokes sky.

I began to feel, while reading this work, as if I were observing a conversation at grand scale, as if two magicians were conjuring earth and sky with their investigations. After that, I returned to a more quotidian form of dialogue—email—to conduct this interview with Pierre Chappuis and John Taylor, who also translated Chappuis’ answers here. What follows is an exchange about the creative practices that created this dual volume and how these processes operate within language, memory, and place. » 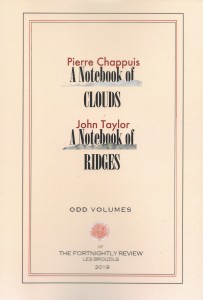