John Taylor has written the preface to Giorgio Linguaglossa’s anthlogy How the Trojan War Ended I Don’t Remember: An Anthology of Italian Poets in the Twenty-First Century (Chelsea Editions). Here is the text:

« The title sets the tone for this lively anthology. Several of the fourteen poets included in How the Trojan War Ended I don’t Remember conjure up the Greco-Roman heritage in various ways, evoking real, legendary, and mythical figures who range from Ulysses to Apollo, from Medea and Hecuba to Caius Cornelius Gallus, not to mention a few modern Greek prolongations of this culture in the form of, for instance, Odysseus Elytis’s Maria Nefeli (brought back to life by Chiara Catapano). The translator of most of these poems, Steven Grieco-Rathgeb, whose own fine poetry is featured here as well, gazes back even deeper into our cultural and philosophical crucible by bringing up the Sanskrit concept of “jaagriti.” The word means, as he explains, “being awake (usually associated with the two other human mental states, sleep with dream and deep sleep).”

« It’s tempting to stretch the simile and claim that something like “jaagriti” is perhaps the goal, or the motivation, of the poetics expressed by such poets alert to the presence of the past in the present. In other words, a sort of dream or imaginative vision combined with wakefulness—a venturesome and resourceful “daydream,” as it were—during which the poet grasps the present as being woven, not essentially with personal memories, but also and especially with aspects of mythology and history (and the history of ideas) that extend well beyond the individual self; and that the archetypal elements excavated by the poet from this vast recorded or imagined past should thereafter illumine the present, albeit sometimes bizarrely, fantastically, or comically.

« Of course, some twentieth-century modernists developed an analogous poetics reviving or reemploying the past within the present. The stylistic techniques developed by T. S. Eliot in The Wasteland and The Love Song of J. Alfred Prufrock come to mind when perusing samples from some of the poets comprised here. Some readers might even recall C. P. Cavafy’s historical poems that resuscitate such or such a figure from the past. This said, the poets anthologized here often push irony much farther than did Eliot, Cavafy, or other modernist forbearers; and sometimes even a kind of jocularity runs through interconnected sequences like Mario Gabriele’s delightful “Travelling with Godot” series or Lucio Mayoor Tosi’s nine-poem suite that begins with Woody Allen and concludes with Zorba and Marc Chagall, all the while giving a metaphorical spin to “canned tuna.” To say the least, such playful poetry keeps staunch seriousness at bay. Antonio Sagredo similarly sets “Farcical” in Rome, in which the narrator confesses to spending his “nights in wine taverns / down Scipio’s red street, / priest-like under those indifferent streetlights, / with Rome’s death rate still far from decent,” only to sum up his current life in this fashion: “Today we celebrate the Wise: / I’ve read the Canticles time and again / and like the Caesars I’ve been slain a thousand times!” In turn, Letizia Leone, whose long poem excerpted from her book The Basic Calamity focuses on Marsyas the Satyr, forges indeed satirical imagery mixing telling appurtenances of the past and present: “. . . a furry satyr / with a shiny new flute he filched from a goddess, / a sex toy, / a device for amatorial magic!”

« It goes without saying that these and many other poems are chockfull of cultural allusions and replete with sardonic, sneering, spoofing, and even—it must not be forgotten—serious allusions to philosophical issues. Anna Ventura, for example, conjures up Trimalchio, the Etruscan “turtle of Volterra,” Torquemada, and finally Bluebeard, of whom she introduces herself as the “third wife, the one / who dared take the key / and open wide the door of horror,” adding that this must not be told to Descartes who “lies / in his flat grave, in the shade / of a half-lit church, / but his light still dazzles / his followers — the enlightened ones, despised / in a world that does just as well / without reason.”

« Actually, the very issues of reason—its shortcomings and consequences, so as not to say perils and catastrophes—crop up rather often. Another way of reading this anthology is therefore to ask what role reasoning, or the lack or abuse thereof, plays with respect to human conduct as it has been displayed over the ages. Giuseppe Talia pointedly raises this question in “Paradoxes,” which brings together science (or, more precisely, formal logic) and history: “Frege’s theories a near failure / lost in the predicate you can’t predicate / when the paradox of the axiom / is nothing but a contradiction: ‘Caesar conquered Gaul.’ But in what way? / With an a priori synthetic character you’d say / in relation to the operating space / and simple analytical proportions / to the number of soldiers used and civilians dead.” In his poem “Wait and See what Happens,” Renato Minore takes off from one of the spectacular outcomes of technological reasoning: pixels. As the poem unfolds by means of permuted lines, other interpretative possibilities flash now and then, indeed like pixels, suggesting metaphors related directly to our times: “There’s the convenient return of the species / go on huddling in the head of a pin / But we dream what we have interpreted / And they give what little is still demanded of them.” And if we are conscious of “dream[ing] what we have interpreted,” isn’t that a sort of “jaagriti” state once again? In all events, let’s ask this: Where is the humanity of our humanity heading?

« Although there are exceptions, including poems by some of the aforementioned poets (that is, pieces dissecting “affiliations,” such as those between poet and parent, between poet and sibling, or exploring other key personal events), the anthology tends to highlight verse that is much more maximalist than minimalist. Grouping his own poems under the title “Should I Return to Caesar’s Court?,” Giorgio Linguaglossa (who has put together this anthology) implicitly challenges contemporary poets to respond to the same question. One has little trouble sensing that he especially targets poets oriented towards the modest particulars of daily life per se, or towards the vicissitudes of their own current existences, instead of towards the historical, mythical, scientific, and philosophical backgrounds rummaged through by most of the poets in this anthology. Such, of course, is just one of the battle lines that can be drawn between contemporary poets in Italy or elsewhere. The radical differences that can exist between the kinds of subject matter considered, by any given poet, as appropriate or promising for poetry, are also visible in Gino Rago’s general title for his interconnected pieces. “We are Here for Hecuba” assuredly suggests an intention to open up a wider perspective than is delimited, for better or worse, by a strictly autobiographical inspiration or an objectivism of the “no ideas but in things” genre. In one of her poems, Donatella Costantina Giancaspero points out that “nothing of what we are / shows on the surface.” The remark aptly defines the generally non-autobiographical orientation of this anthology, which is, moreover, as has already been seen, by no means exclusively focused on the present day or, for that matter, on any readily available “surface.”

« Yet as should also already be clear, the variations on this overall poetic orientation are many. Contrasting poetics are also brought forth, though they are not necessarily representative of all of the work of the poet in question. Antonella Zagaroli, who has referred to scientific theories in some of her previous poetry, aspires here to be “raw and rebel Sappho” (as opposed to “Emily”) and offers a touching personal image at the end of the same poem by avowing: “I am the picked then hung back apple / in the secluded garden.” Elsewhere, she declares, conspicuously in regard to the overall context of this anthology: “To anyone still seeking a voice with answers / the past teaches nothing.” Some of the more whimsical pieces by other poets reach or represent the same conclusion: not even the past can help us understand what is going on in the present. Perhaps the entire anthology could be crowned with George Santayana’s maxim—“Those who cannot remember the past are condemned to repeat it”—as an epigraph, provided that his solemn words were followed by several question marks.

« And then there is Alfredo de Palchi. Born in 1926, he is the eldest poet selected and the author of an oeuvre that is at once thematically coherent and varied. The poems chosen here belong to his relatively recent pieces, some of which are erotic all the while provocatively appealing to Christian symbolism; they constitute an autobiographical angle rather different from the one expressed in some of his earliest writing, which depicted his suffering during the aftermath of the Second World War. Yet even back then, as now, scientific analogies were present in his work. Here, in a poem from 2009, he writes: “If only I could relive the experience / of hell on earth inside / the physics of ‘dark matter’ collapsing / into a hole full of emptiness / till it becomes ‘dark energy’ in some other / universe in some other emptiness / where / the sequence of life would repeat.” The poem progresses to a characteristically tonic conclusion, to say the least, but it should not be overlooked that de Palchi’s image of the sequence of life being “repeated” neatly pinpoints one of the central concerns of this anthology. The need for a repeat performance, as it were, is formulated in various ways, implicitly or explicitly depending on the poet, and the underlying question that tends to unify many of their individual poetics is thus this: To grasp the present taking place before our eyes, must we first try to grasp it before it happened, or perhaps afterwards, or through some deceptively farfetched parallel? » 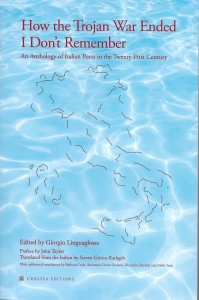 How the Trojan War Ended I Don’t Remember: An Anthology of Italian Poets in the Twenty-First Century (Chelsea Editions, 2019)