The spring 2018 issue of the review « The Bitter Oleander » includes a special feature on John Taylor, with a long interview, two sequences of poems (« The Sea at Sète » and « The Word and the Stream »), and excerpts from his translation of Franca Mancinelli’s Libretto di transito as The Little Book of Passage. An excerpt from the interview with Paul B. Roth:

Paul Roth: Can you nonetheless help us approach the mystery?

John Taylor: Let me recall the French writer Julien Gracq in this regard. In a short text about the limits of biographical writing, he develops the idea that an author’s personality, upbringing, and milieu have relatively little to do with the creative act of writing per se. He argues that investigating a writer’s “living environment” is like confusing the guy wire with the espaliered branch of the pear tree that twists around it. The branch draws no nourishment from the wire and ignores its existence. To Gracq’s mind, a biographer needs to “prune” everything that has not occurred during those “hours” when the writer’s self “listens profoundly” to the world. His remarkable insight is perhaps debatable for some authors, but it has long fascinated me because it is so close to my own experience of writing and, especially, of the “hinterland” of writing. What was it that, long ago, got me “listening” to the world around me, and to the language in me and around me, in an unusual, not always entirely comfortable way? Was it one or two of those aforementioned facts, events, people, or environments from my childhood? But countless other people have had similar experiences and not felt the need to write about them, at least not in the obsessional (and professional) sense of polishing a text and making it publishable. In any event, quite early on, I had the impression of standing somewhat apart from the world around me—whence the need to “listen” to it, to observe it—and of even being at a slight remove from my native tongue (and I knew no other languages at the time). As if there were something not entirely natural, or immediate, about my relationship to my surroundings and my language. During my adolescence and thereafter, writing increasingly emerged as the “mediator” of these “distances” and the “medium” of the equivocal, ambiguous emotions that characterized my relationship to this “gap.” 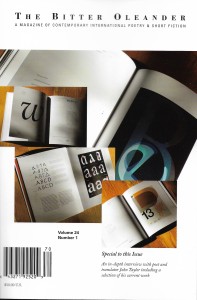