Publication of the first English translation of Philippe Jaccottet’s « Truinas », in the « Odd Volumes » series of The Fortnightly Review. The book is a tribute to Jaccottet’s friend, the French poet André du Bouchet, and an evocation of the latter’s death and burial. Here is the opening passage:

« It was the 20th of April, on the eve of André du Bouchet’s burial, when his daughter Marie called to ask if I would say a few words for the occasion. I told her I wasn’t sure I would have the courage to do so. Then that same evening, after imagining the burial would be even more sorrowful if no one spoke up at all—even as I already suspected no genuine ceremony would be held—, I quickly wrote this down. . . » 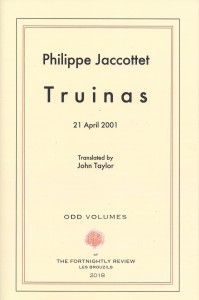